Similar to the overprint preview and pixel preview functions in the  Adobe Illustrator View menu, Prinergy Tools adds a trap preview function, which displays the effect of automatic or interactive trapping more clearly by decreasing the opacity of the original objects. The preview layer will not influence the layout export effect.

This figure is the trap effect in Overprint Preview mode:

This figure is the trap effect in Prinergy Trap Preview mode:

In the Illustrator menu bar, from the View menu, select Prinergy Trap Preview.

Trap Preview mode can be closed by closing Trap Preview in the Layers dialog box. Leaving this layer open will not influence the layout export effect in subsequent work. 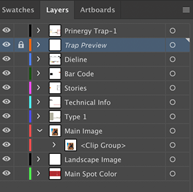